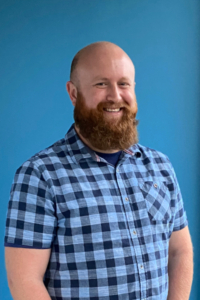 Steve May, Director of Information Technology

Steve is the Director of Information Technology (IT). He manages ServiceTrade’s internal security and the employee tech stack and hardware.

Originally, I was recruited back in June 2015 for the project manager role by Aaron Shoemaker (Director of Customer Success) and Wesley Cox (Technical Account Manager), who were some of the earliest employees. I was doing managed IT services for businesses who usually weren’t big enough to have their own IT department. Aaron said I should look into working here and that it would be sort of like going back and working in support but also a little bit of project management and onboarding. It would be a little bit of a mix bag because we were such a startup then. I was intrigued and decided to do it. That was a career change for sure.

I left ServiceTrade in January 2017 when one of the companies I’d worked with just ballooned and asked me to come help set their IT up, so that’s what I felt was the right move at the time.

But then the same thing happened again. ServiceTrade ballooned and realized they needed internal IT. I was like, “you know what, I’ve got my old client in a good place, and they’re basically on autopilot, and I have a replacement trained. Yeah, let’s go do this. Let’s build out ServiceTrade again.” So I came back in August 2021. 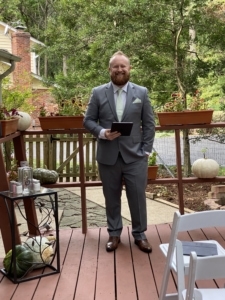 This is the Reverend Steve of the Universal Life Church of San Jose, CA, getting ready to oversee the wedding of two friends.

What do you do as the Director of IT?

Right now, we’re really just building up the system. We’re building processes and some automations. This might sound strange, but I was very impressed with the way the ServiceTrade app works. So, one of the things that I brought back to all the other IT I’ve done since I’ve worked at ServiceTrade support is the concept of recurring services, which become jobs to our IT workday. They’re tickets in a ticketing system that constantly resurface on a schedule and can be dispatched to the given techs working in IT today. Like services in the ServiceTrade application, they have specific steps that must be done and verified before they can be closed or marked as solved. Essentially, we’ve taken large parts of the office workflow in the ServiceTrade app and made our internal IT work very much in the same way.

So I’ve built this really robust foundation that isn’t just for me but for the team as we grow. There’s going to be an enormous amount of structure in place for how to do things and how to maintain things. Some of these recurring services are things like backing up and maintaining the various cloud services that we utilize internally to run the company – like the ServiceTrade application, our internal IT is 100% cloud-based. The other recurring services are much more personal, like following up with people and checking in even on an individual level.

The other major part of my job right now is security hardening. I’m finding the right balance between keeping things mostly the way they are and not making things more difficult for people but plugging some of the major holes – things like password management and getting people to keep their computers up-to-date.

What has been your experience coming back? How have things changed?

It’s been awesome that we’ve grown so much, but you have to figure out the organization because it’s so different. I enjoy it, but it’s definitely an effort to wrap your head around how everything works now. Yeah, I was here before, but there were like 15 employees, so it’s essentially a totally different company. I’m in the shoes of a new hire basically where it takes a couple of months to wrap your head around who does what and sort of how the organization works. At least we’re the size where you can wrap your head around that. When I worked for Apple, we had 150,000 employees, so no one will ever understand how everything works; it’s too big. You can only understand your little corner of the world.

Meeting everyone and seeing how everything fits together, especially coming from IT, is useful because I want to figure out not just where we’re weak or have opportunities, but I want to get the right people the right tools and get the team sharing information. A lot of times the marketing team, for example, has their way of doing things and that’s totally fine and great, and I wouldn’t even try to change that, but I would love if the Inside Territory Managers knew about this cool tool marketing uses. I love when I can say, “Hey look, you might think of this as only a marketing tool, but it’s actually really useful for other things, too.” I love tying teams together like that, especially when it means I can talk to people and share cool tricks.

Which of the ServiceTrade culture values is your favorite and why?

I actually really like ‘We are weird’ the most because there’s a couple of reasons – almost all the rest of the values are true and we really do live them, but you could find them at at least some companies, right? Everybody says, “the best part is our people,” but do you live it? I think we really do live these values, and I love that we just put out there that we are weird because we are definitely an interesting collection of people.

The only other experience I’ve had like this in my life was at certain sections with Apple. There was something weird about it, the people at Apple talked about it, and they compared it to companies like Nike and Disney because those are brands where you can see the logo and you know what it is, it doesn’t matter where you live or what language you speak. Not everyone’s a fan of Nike or of Apple, but there’s so much diversity in who comes and works there, and you’re like “Wow. I never would have known any of these people in my normal life, and yet here’s some of my best friends now.” That kind of magic – honestly I don’t even know how it’s possible at ServiceTrade other than our work environment – because yeah our product is cool but not many people here are like “oh yeah I use ServiceTrade that’s why I applied to work here because I love the app so much.” So we don’t have that affinity to a brand like Apple, Nike or Disney, yet we have still created an environment that I would compare to Apple or Nike in terms of stunning diversity in all sorts of life coming in.

That’s also got to be my favorite because that’s the hardest to recreate by far. I think if you told me: “Here’s a couple million dollars to start a company and hit these six out of seven culture points.” I could probably at least have an idea of how to make it happen, but I’m not sure how to make ‘We are weird’ happen. 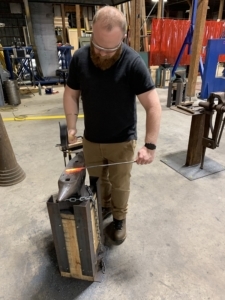 This is at Shopspace Raleigh – a cool shop where you can use their forges, welding equipment, and other heavy machinery.

Do you have any favorite ServiceTrade memories?

I have a funny one and a serious one. My funny ones usually go back further in time when I was on support. Support has a lot of fun, and we get the customers in on the fun wherever possible. For example, you probably hear: “Please confirm when done.” A lot of people at ServiceTrade say that, and it comes from customers asking for something, and they say, “please confirm when done.” It’s this thing that not one person but multiple people will say and since it’s been said so many times, we like to joke about it.

On a more serious note, and probably one of my favorite experiences recently was a challenge. I’ve been in the game for a while, so you don’t always run into challenges, but since joining ServiceTrade, I’m continuously challenged. I am able to overcome it. There’s always somebody or a team to help you, and I always end up learning. One of my most recent challenges has been in the areas of things like OnePassword, the IT agent, and just doing a lot of this stuff that’s good security, but also it’s not a choice. The Board of Directors says you have to do this, and they own the company. They say what to do and we do it. I hate to get to that level, but I’ve had to get to that level with some people because I’ve faced some pretty hostile resistance. My approach is usually a lot softer, but I’ve had to get on the phone and Zoom and hear people out and really try to change some perspectives because I don’t want anyone to misunderstand what we’re trying to do. So far, I’ve been able to overcome at least the known hostility towards IT changes. It’s been an interesting challenge because it’s a technical challenge with how you approach it, but it’s a people challenge, too, which is even harder.

What do you like to do outside of ServiceTrade?

I love to do outside stuff – hiking and kayaking are probably go-tos. “Long walks” is funny, but my fiance and I actually do a lot of long walks like two, three-hour kinds of things. That’s multiple times a week.

Inside – tabletop games, board games, lots of books. I’m still a pretty heavy reader. Not really much in the way of TV or anything. We do go to the movies a lot. 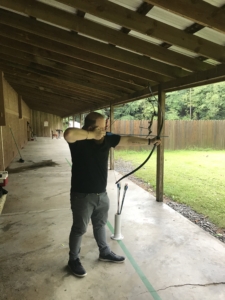 Enjoying the outdoors at Primland, a hunting and sporting resort.