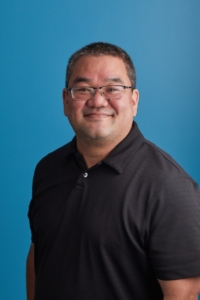 Marc is part of the Engineering team as a Quality Assurance Engineer.

He tests software created by our engineers before it is used by customers to find bugs and make sure it’s working as expected.

I started in 2014. At that time, I think there were twelve people working for the company.

I’m originally from Hawaii. I was a developer for about ten years, and I just didn’t like it. It wasn’t for me. I wasn’t good at it.

My role now is Quality Assurance (QA), which is nice because I really enjoy it. I can exist in both worlds in that if I find a problem with the code, then I can actually look at the code and find any vulnerabilities.

I decided to move out of Hawaii because when you live on an island, it starts to feel like an island. I put out feelers for Austin, Texas; Salt Lake City, Utah; and Durham, North Carolina. I was interested in those areas because I had a lot of friends who used to live there as sort of a jumping off point for a big city. I had three friends who moved to Durham and absolutely loved it, but it was too small for them so they actually moved to New York City. For me, I’m not a city person, so what they were telling me, I was like “Well, that sounds perfect.”

The other reason I chose Durham is because I went to school in Florida at Full Sail University where I studied video game programming. I loved the southern hospitality. We have the Aloha Spirit in Hawaii, and the only thing that could rival that is southern hospitality.

Brian Smithwick, ServiceTrade Chief Technical Officer, called me first, and it was such a wonderful company that I had to get involved.

What do you do as a Quality Assurance Engineer?

We try to catch the bugs before new code goes out to the customer. When a software engineer finishes their development, they hand it off to one of the QA people, and we try to break it – in any way possible.

We try to think like a customer and act like a customer. Especially since we have a large customer base, if there’s a hole, they’re going to find it. So our job is to find those holes before they do and make our software work correctly.

If a QA engineer does find a bug, then we reach out to whoever the developer was and put out a list of the problems we found. Then they fix it, put it back into our pipeline, and we work on it again.

We’re not the last link in the chainsaw. Once we say it’s good then we pass it off to the product manager, and they get one last pass at it. Because they’re so high up, you don’t want them to find anything.

What’s it been like watching the company grow so much during your tenure?

For the development side, we really didn’t grow until the last couple of years. It was interesting seeing every other team growing around us and getting to make new friends and meet new people. When we took off and started growing though, we started growing big time.

When I first started I was the only QA person for years, then another person joined who was in St. Petersburg, Russia. Now, we have two other QA engineers in St. Petersburg and one other person here in RTP who started about a month ago. Each product team has their own QA engineers, so the mobile team has one, PartsLedger, and I’m on the web application team. It’s so exciting to see people on the team that are new that I’ll get to know.

It’s been such a rapid growth. We started off in half the building where we are now. We were packed in like sardines before we got the other half of the office. In fact, three developers and I used to be in an office that was meant for only two people. We had to watch out when we backed up our chairs because if two people were backing up at the same time, they could hit each other.

I can’t see this slowing down anytime soon. I’m super excited to see where it goes. I’m in it for the long haul. I’m very happy with ServiceTrade. Billy Marshall and Brian are just great individuals to work for. To have Billy as CEO know every aspect of your life, stop by just to talk to you, and make you feel like “Oh, he knows me.” They really are two such nice people, and they really do put us first. It’s nice to have that kind of company to work for.

Do you have any favorite memories you want to share?

My favorite memories are always when we get together. When we were working in the office more, we used to have potlucks, and it was always interesting to bring a dish from Hawaii and see everyone’s reaction.

My parents still send me care boxes with a lot of Hawaiian ingredients. Making something from that and presenting it to somebody who has never seen this dish before is really fun. I actually really like cooking.

Another thing that was a lot of fun was the party that we had to open up the new office space in April 2019. I think everybody was kind of relieved that we had grown to that point that we took over half the building’s second floor and that we had more space to stretch out.

Seems like a lot of my favorite memories happen around food. Billy would do his low-country boil, which is a very fun time. We used to gather at the table a lot. Of course with the pandemic we can’t do that, but that’s probably where my fondest memories are. 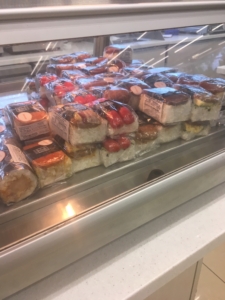 Here is a typical Spam musubi selection at a local gas station in Hawaii.

What do you enjoy doing outside of work?

I love to walk. There’s a lot of nice hiking trails around here. I have a dog, but she’s gotten a little too old to go on walks with me.

I do develop on the side still. I do some mobile stuff, but I’ve slowed down on that. I should pick it up again. It’s nice that I’m not burnt out from programming all week that I can program on the weekends for myself. It’s a muscle memory that I don’t want to lose. It’s nice to just be like “Hey I have a cool idea for an app” and then have something show up actually on your phone. I do have some stuff I think in the Amazon Marketplace. 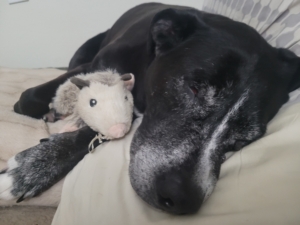 My dog was a rescue from Hurricane Florence and was part of a foster organization that Shawn Mims is a part of. He brought her into the office a bunch, and I knew I had to give her a forever home.

Which of the ServiceTrade culture values is the most important to you?

I like the weird one… well actually, let me change that. We’re curious. A lot of the developers like to create stuff on their own on the side. Like I have my mobile app. Graham McCullough has so many different things (he wires his own sequencers); everybody just seems to be doing their own projects on the side. Whenever we get together to talk about our projects, it’s just so interesting.

Vaughn Clayton is such a quiet guy, and one of my favorite days in the office was when the sales department (usually the loud ones!) had to tell him to be quiet because he built a Tesla coil and brought it into the office. He was playing music off the Tesla coil, so when the electricity was cracking, it would actually be in the note of the music.

It’s fun to see projects that everyone is working on. It always seems like everybody on the engineering team is creating, and it’s fun to see them bring it in and show it to everybody.