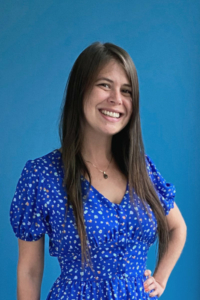 She works with customers to find solutions for their business needs and make sure they’re getting as much they can from their investment in ServiceTrade.

As an Account Manager, you’re really in control of your own schedule; it’s like managing your business. With account management, there’s so many different types of meetings you can take, so you really have to manage it and be in control of it.

I always have a goal of ten high-value customer activities a week. Those are meetings where I’m talking with my customer, learning about their needs, and making sure I’m setting next steps. I act as an advocate for our customers but also just a set of ears. I’m a place for them to let me know all their needs and wants, talk it out with them, and figure out if there is a solution that fits their needs. It’s kind of like acting as a consultant, but a consultant that is constantly making recommendations to get you in the right direction.

The big rocks of account management are those high-value meetings where we demo our add-on products, talk about other services, go through their account health review, do Q&A and quick training sessions. During those customer meetings, it’s all about diagnosing the customer’s needs and making a recommendation.

Our goals are growth, retention, and expansion on the account management team. 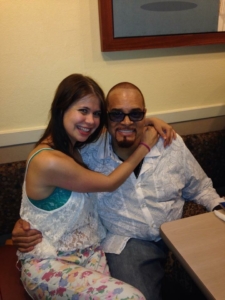 That one time I met Sinbad.

I started out at REVGEN (a sales development partner of ServiceTrade) on the ServiceTrade campaign in January 2019. Two months in, Anna McMahon, VP of Inside Sales, asked me if I wanted to come to ServiceTrade full-time as a Sales Development Representative (SDR). I said, “yes as long as I can keep the training at REVGEN,” so I’d go back once a week and train with the team over there. When I first joined the SDR team, there were only two of us.

Six months after my start date at REVGEN, ServiceTrade promoted me to be an Inside Sales Territory Manager (ITM). After working as an ITM in the TOLA (Texas, Oklahoma, Louisiana, and Arkansas) territory, Anna thought I could gain a lot from working closely with Lauren Rice (Senior Director of Sales – West), and she was right. I moved over to the west coast territory and had a concentration of California and Hawaii and eventually took over the southwest. Anna could see that I needed a little bit more coaching with the ITM role that I received from Lauren. It’s good to have managers that take note of that. I did this for two months until the team approached me to join the Account Management (AM) team.

There’s been a lot of transition on the AM team, and I’ve done whatever I need to do to help with the constant flux of new customers coming in, new people joining, changing territories, or changing account assignments. Now, I’m a Senior Account Manager.

We’ve had the wonderful chance to grow this team. When I came on to the team, there were three of us. Now there are eight of us. It’s been really cool to see the growth of this team and the company itself. I see myself as a very moldable person in adapting to where I need to be to help the company continue to grow at the rate that it’s growing, and I think they’ve done a good job of seeing my strengths and putting me into the right places. 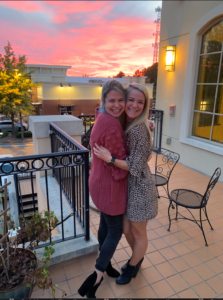 Not only is this picture beautiful but I credit Lauren for molding me into the sales person I am today.

What’s helped you be so adaptable?

It’s always been about growth potential. I saw that when I was on the REVGEN team for ServiceTrade. You can think of REVGEN like you’re in high school trying to figure out what college you want to go to. All these people are wanting to go to these big schools or these big companies. I was thinking yeah they sound cool like a fun party school. But, I saw that there was so much more room for opportunity coming to ServiceTrade.

In my original interview, I said I plan on staying, and I eventually would like to manage a team and am open to other opportunities. When I came on, I saw myself on track as SDR, ITM, and then eventually what I wanted was to manage the SDR team. But I was in the ITM role, and it didn’t go as expected, which can happen. I was discovering that there was another role I could give a try and see if I’d be better at it. I was actually excited to be given the opportunity. They were like, “ok we believe in you.” The people in this company really care about more than your professional growth; they care about your personal growth and your personal well-being.

You hit your yearly sales goal in 2021. What’s helped you be successful?

There’s a lot that goes into it. I say manifestation is a big part of it. I write out affirmations every single day. Two “I am” statements, one “if this, then that” statement so if something goes out of my control, I think of how I will handle that, which helps put the frame on my day.

Another thing I do is I break my day into quarters just like I break my year into quarters. That gives you the opportunity to reset if something happens that is not quite what you expected.

The other thing is that the hustle is constant. I really don’t stop. If I have a hole in my time in which I can fill it by helping somebody else then that’s what I’m going to do. From that, I tend to grow and learn because there’s a lot of times people ask me questions that I don’t know the answer to, and then I can go find out and come back and tell them. I’m like, “Thanks for asking questions. I didn’t know that, but now I do.”

I think it’s because I have the hustle from the SDR role is a really big part of it. With that SDR role, you gain so much structure and how to handle calls – how to roll back, how to push forward, how to get into that SPIN selling, how to begin the challenger sale, how to feel/felt/found. You really learn every single sales skill you need. It’s about not forgetting that when you move from role to role. You’re not exiting one to get rid of the responsibilities you had, you’re exiting that one to take on more responsibility for your own business.

Do you have any favorite memories from your ServiceTrade career so far?

My favorite memory is when we did a sales karaoke night at a Korean karaoke bar. We had our own room, and there were lots of people singing and giving it their all. There were a lot of great performances, but the best performance of all time was Maribeth Steffen doing “Man in the Mirror” by Michael Jackson. To this day, every time I hear that song, I hear Maribeth singing and I see Maribeth dancing to it. She’s quite a performer. Number one ServiceTrade memory right there.

What do you like to do outside of work?

I am teaching myself American Sign Language. I like to sign to music to help myself learn and remember the words. I have a podcast. It’s been really cool. I didn’t know what I was doing when I got into it, but it’s helped me improve myself as a person.

I have my dog. I hike with him all the time. I’m quite the singer. I don’t do it in a way that I’m performing for other people, but I love it. My number one work break is probably a singing break.

I love to cook and make artsy crafty cooking projects that are tasty, too. It’s not just about what it looks like, but it’s also about the overall flavor. I did a tuck and roll eggroll party – had Cuban egg rolls and steak taco egg rolls. 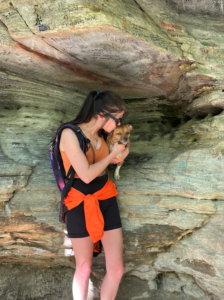 Wu and I love hikes. This picture is from my birthday party last year, where I gathered a group of people to hike to the top of Hanging Rock.

Which of the ServiceTrade culture values is your favorite and why?

Mine is ‘we are weird.’ I think it makes perfect sense if you know me because the more you get to know me, the weirder you find that I am. Like, at first glance, it’s like “Oh, that’s a very normal person.” But, no.

Everything is weird. Weird is not bad. Weird is unique. What you find at ServiceTrade is unique mindsets, and it’s from those that you have creative ideas and great collaboration.

I remember when we were about forty employees and we had our Christmas party. I looked at Maribeth and said, “Let’s take a look around, right now, and really soak this in because we can very honestly say that we like everybody that we work with, and as the company continues to grow, we may not be able to say that.” Well, we’ve more than doubled in size, and I can still look around and say I like everybody at this company. It’s pretty cool. It’s just because we’re a bunch of weirdos hiring a bunch of other weirdos.