This can be extremely helpful when you’re in sales. Why? Because storytelling is a huge part of successful sales. We regularly train our sales teams on storytelling. Everyone shares interesting stories they hear from customers and prospects because stories are so important in relating to prospective customers.

If your sales team is engaging and they can tell a good story, they can be successful. But there’s another story they might be telling, and that’s what we want to warn you about.

Watch this scene from the 2011 movie Moneyball where the Oakland A’s are trying to replace three star players lost to free agency.

Did you notice the helpless look from General Manager Billy Beane as his experienced scouts start evaluating opportunities to replace players in their pipeline? You hear: “He has the looks.”  “He’s ready to play the part.” “He just needs the playing time.” We won’t even mention the girlfriend (bless her heart.)

Do you know what that sounds like in a commercial service business?  “I’m behind but I have a lot of good opportunities about to drop.” “We have a great relationship. We went out for drinks last night and it’s a done deal.” “They’re just busy. But they said they’ll commit by the end of the quarter.”

“He has the looks.  He’s ready to play the part.  He just needs the playing time.” For a sales manager or business owner, this subjectivity is easy comfort but dangerous to believe. So our warning is this: Don’t. Be. Sold.

Now, look at what Billy Beane did instead of being sold.

Baseball managers traditionally only cared about batting averages, bases stolen, and RBIs.  What the Oakland A’s did was start thinking about getting on base.  It was a statistic that was completely ignored but helped get the team to the playoffs with about a quarter of the budget other teams had. They expanded their view to see the whole story.

Believe it or not, most business owners and sales leaders are watching the game instead of coaching. They’re sitting in the dugout waiting for home runs because what else can we do but believe the people that are going to bring us the wins?

Once you see the whole story you can stop spinning your wheels waiting for runs to be scored. You’ll know what’s happening, not happening, and what needs to happen to get those wins. Knowing the whole story removes the guesswork so you’ll know who needs some extra time in the batting cages, who needs to take a night off, or who just needs to be cut from the team. Once you’ve figured out the formula and what benchmarks you need to keep everyone accountable, your success becomes repeatable. It becomes predictable rather than a surprise at the end of the month, quarter, or year.

The great thing about sales is that a salesperson can have as many at-bats as they’re willing to go out and get. At-bats at ServiceTrade are initial activities that are measured by the number of calls recorded in our CRM and made in our phone system.

This one is easy, it’s the number of opportunities being generated and is pulled directly from a CRM.

The number of opportunities won. 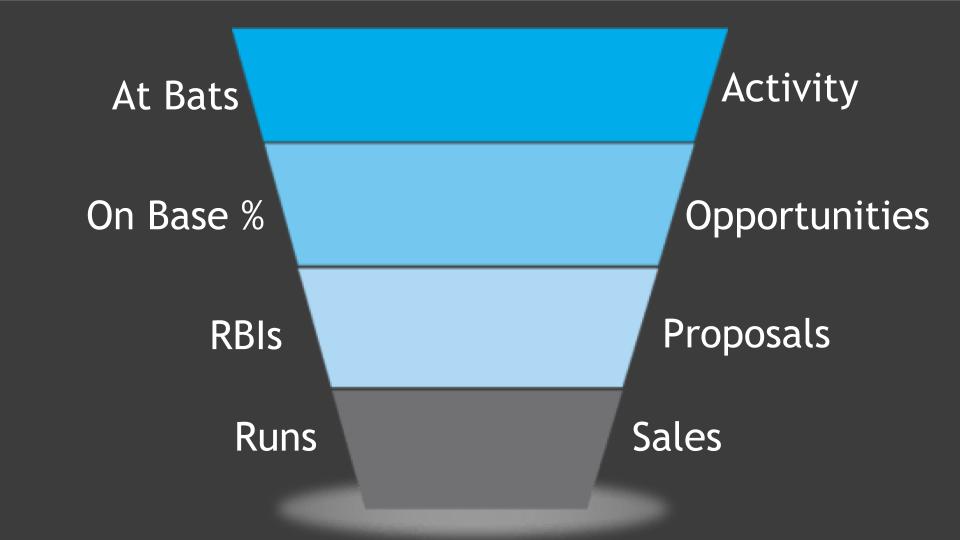 Now that you’ve looked at the front end and what’s most in your control, you can start considering some other stats like opportunities left on base, your time to turn deficiencies into quotes, and your quote approval rate.

There’s no one formula that works for everyone, but once you have an understanding of the whole story and what your stats sheet should be saying, you can coach the game rather than sitting in the dugout hoping that sales delivers the home run they say they’re going to hit in the bottom of the 9th.

This blog post is adapted from the 2017 Digital Wrap Conference presentation “Moneyball” by ServiceTrade VP of Sales Anna McMahon.